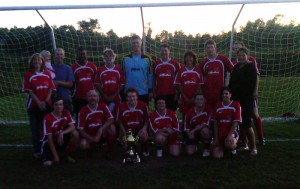 The championship match between Joe Tomato’s (Red) and Joe Tomato’s (Black) turned out to be a great match, ending in regular time 0-0. This forced an extra 10 minutes which still didn’t produce a goal, pushing the game to shoot-outs. The first four shooters on each team hit the back of the net, and it wasn’t until Joe’s (Black) fifth shooter missed, that Joe’s (Red) had a chance to score, which they did, winning the league playoffs.